Piece of Me: You I think I'll miss most of all

Two days ago I left my family and Fien.  And yesterday I arrived in the UK not having shed one tear.  It hasn't hit me yet.  And when it does I'm going to be a mess...


I like: um...without sounding pathetic, it's really hard to think of something right now.
I don't like: realizing how hard it is to say goodbye (more on that story later)
I want you to know: that I think I'm going to keep the title of my blog even though it won't really make sense anymore...and that I really am going to blog about all the things I said I'd blog about it...now I'll have more time seeing as I'm unemployed.
I've planned: six weeks in the UK and Ireland...Edinburgh, Dublin (where Mags is joining), Liverpool, Stratford Upon Avon, Nottingham, Cork, Isle of Skye...you name it...I'm seeing it...if I can afford it...
I want to say to someone special: Dear Holland, Fien, Suzan, Rogier, Sket, Mags, Lily, Kim, and everyone else: I miss you already.

Picture of the Month:

Woord of the Day: Sprokkelmaand - Gathering Month (or February)
Posted by Libby at 2:20 AM 14 comments:

Labels: holland, just me and Fien, nanny/aupair, piece of me, travel, UK 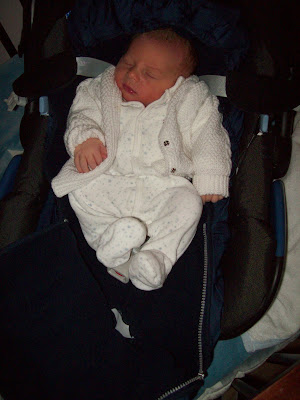 Born the 24th of January, 2011
Time: 18:44
Weight: 3860 grams
Zodiac: The Waterman (Aquarius)
Adorableness: Off the Charts
Mama and Baby are both doing well.  Rogier is a proud Papa.  And Fien is immensely enjoying her roll as "big sister."
Let's see how things are going shall we?
Here's Fien ridiculously excited to be in the playpen with her brother.  Big Sister/Little Brother shirts courtesy of Kaiser Permanente in California (thanks Mama and Papa!) 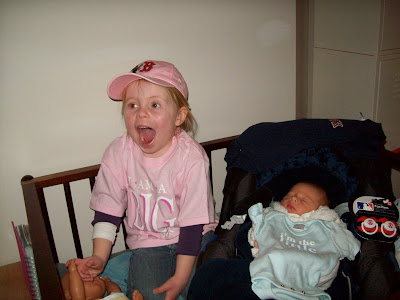 Here's me with the Munchkins... 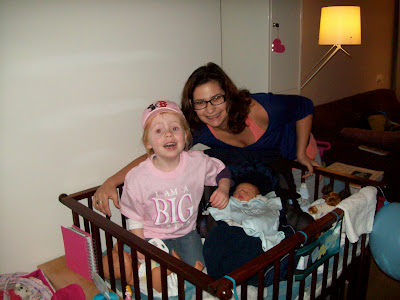 Here's Mags with the munchkins.  Romper has been switched to show off the Red Sox accompanied by matching B/Minnie hat (I'll allow this non-A's gear just only because it's so darn cute!) 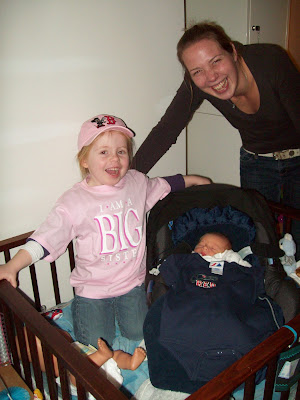 And here's the crowning glory...the greatest moment of my day... 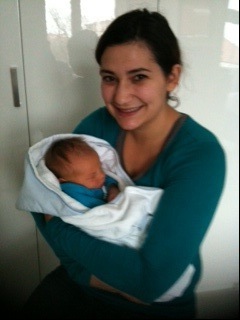 LOOK HOW TINY HE IS!  AND HIS HANDS!  AND FEET!  AND HE WEIGHS NOTHING!!!
Sigh...what a wonderful week.  I'm sure more pictures will follow.  I'm going parent-camera-crazy.
Word of the Day: zoon - son
Posted by Libby at 2:24 PM 10 comments:

My two text messages for the day:

Suzan: Libby, Sket is part of us!! We will be home tomorrow if nothing goes wrong. Love, Suzan

(He was eleven days late)

Welcome to the world baby Sket! Can't wait to meet you tomorrow! 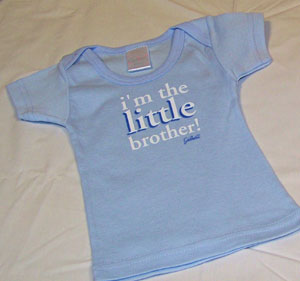 Well seeing as it's almost Fien's half birthday, I figured Day Three of Fien-a-palooza would be...
Fien's 3rd Birthday!
So Fien turned 3...back in August...here's what happened...
First Fien got her presents from the family... 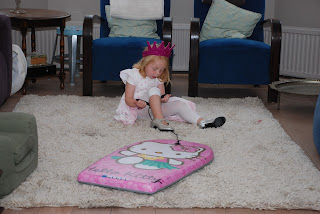 (princess name plate made by Libby not pictured...must remember to get one of those)
Then we got everything ready for the party complete with the strawberry Dora cake I made her... 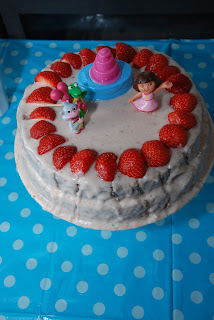 Then the Guests arrived!  My job was to lead the craft...we made Princess (or Prince) Crowns... 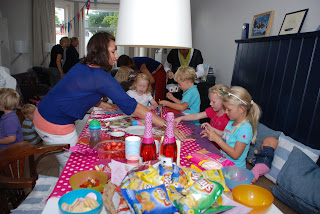 (with some help in the translation department from Oma)
Then it was time for cake.  Everyone sang (not Happy Birthday), and of course the Dutch THREE CHEERS!... 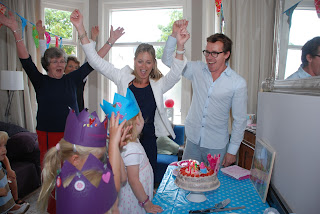 But at the end of the day, once everyone had gone home, we just sat back, and used the rest of the arts and crafts to our hearts content... 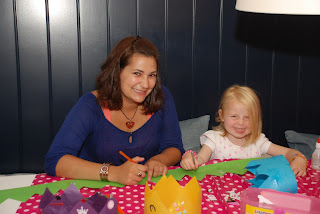 Of course, like most three year old presents...one of the gifts she recieved would soon be deemed the most annoying toy in the world... 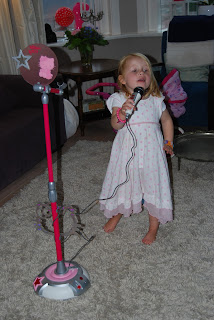 Day at the park

Hey! It's the second day of Fien-a-palooza!
Today I don't have much to say about it.  I think the pictures will speak for themselves.

So today is Fien at the playground by our house in Noordwijk being adorable and doing everything "BY HERSELF!" 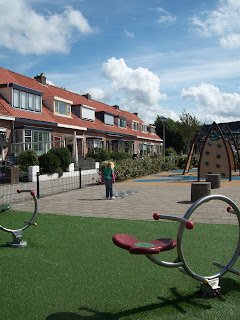 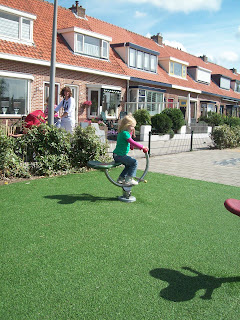 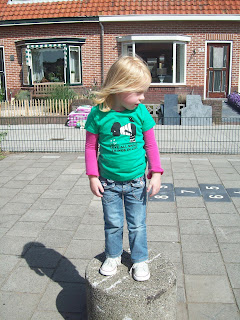 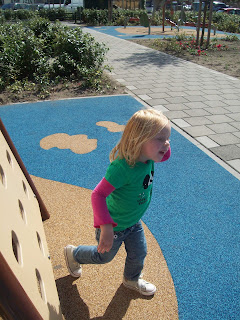 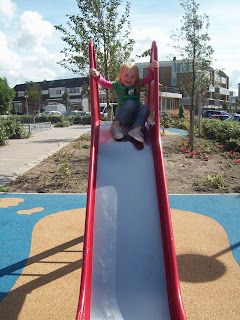 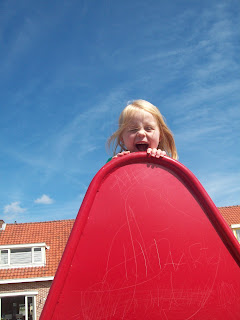 Word of the Day: speeltuin - playground (literally play garden)
Posted by Libby at 9:55 AM 1 comment:

Labels: just me and Fien, noordwijk, parks and places, photography

No animal should require Eight Legs

Dude, I'm back (don't call me dude.)
I have TWO WEEKS left with my munchkin.  That's right.  And since there's so much to catch up on, the next fourteen days are going to be dedicated to her.  Because you can hear about everything else later.

Spiders FREAK ME OUT!  It's no secret that I have an extreme case of arachnophobia.
I was totally fine with them until that stupid Jeff Daniels movie...what fifth grade substitute thinks that's a good movie to show your class on Halloween?
Here is me overcoming this fear in the summer of 2008... 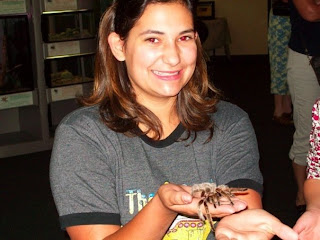 See that twinkle in my eye?  Nope that's just me on the verge of tears.  That smile is not real.
In the fall, there is a type of wood spider that comes out and decides that the entirety of Holland deserves to be it's new home.  You find them everywhere.  You tear down the web and a minute later you are watching it rebuild.  They are over your head, blocking doorways, under bike seats...it's not fun.  And since they're small and you can't see the webs from a distance, you just look like a crazy person running around ducking and avoiding and being altogether INSANE.

Well Fien and I enjoy walking and taking pictures and since I had an awesome zoom, I decided I could take pictures of them from a safe distance.  As my sister would say (when confronted with Mickey Mouse) "I can see them from here."
So here are the creepy arachnids (the small pictures don't really do them justice, but if you feel like it, you can click for a larger image)... 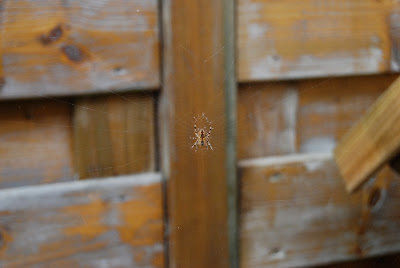 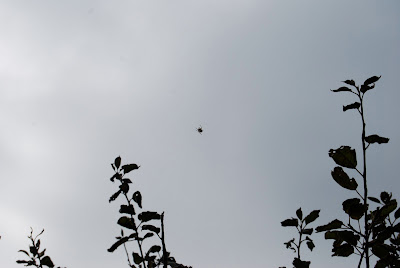 Above the gate leading to the backyard (and threatening to come down on your head AT ANY MOMENT!) 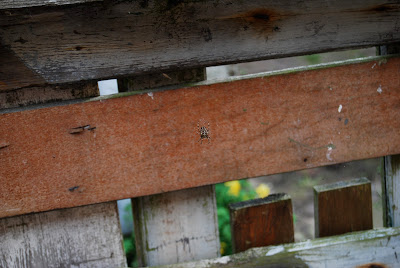 In the walkway to the gate. 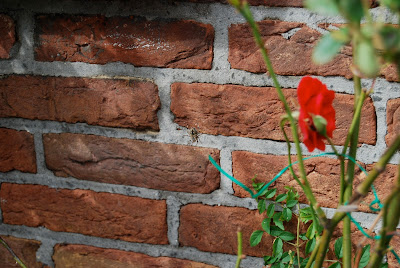 Doorway right outside the walkway 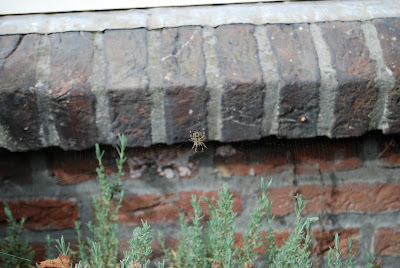 Window next to the doorway
Notice I haven't even walked 200 feet yet...
And then as I stood from a distance, snapping pictures... 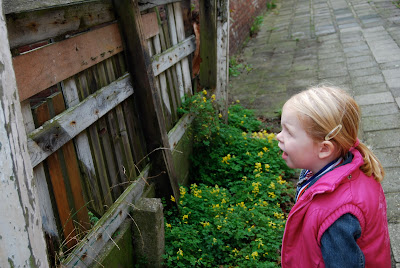 There's nothing like being made to feel a wuss by a three year old who doesn't even like when I turn on the vaccuum cleaner.

Well winter came, and they all seem to be gone.  And I'm thankful I'll be gone before they decide to return.

Piece of Me: the month when there's always snow

I know I already did one for 2011, but I still have to do one for January.
Since I've already been dong this for a full year (!!!) I'm not going to repeat the word of the days.  Instead I'm going to give you the literal translation of the descriptions of the month.  Enjoy!

I don't like: that it's my last month with my munchkin.  I'm already tearing up thinking about it.

I want you to know: I did not go crazy for the end of Christmas sales.  Not a single skirt or shirt was bought at H&M.  And my credit card is thanking me.

I've planned: to run around Holland and see all the things I should have seen when I lived here for the past year


I want to say to someone special: dear Fien:  I hope you like San Francisco because I'm taking you with me.

Picture of the Month: 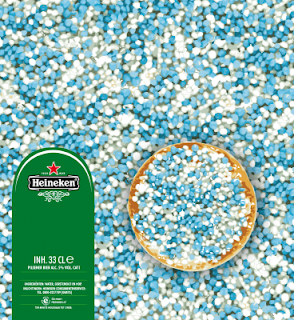 The People Whose Names You May Not Know

Chances are, if I follow your blog and I don't actually know you personally, you're a SITS-tah. I'm sorry if I don't greet you this way in every comment, but know that I love and appreciate each and every one of your blogs!

That being said, some images may come from google image search, my friend Lily/other's facebook, or news posts that I read. Those images retain their own copyrights.